Initial artist impressions for the new building were today released featuring a contemporary design with a white exterior, referencing the white clay of the Bendigo region.

The facade will be etched with a pattern to be designed by a Dja Dja Wurrung artist, to be appointed following an expression of interest process. For now, the artist impressions show a placeholder design inspired by the chevron pattern on a Dja Dja Wurrung shield that has been repatriated and is held by the Gallery as a designated Dja Dja Wurrung Place of Keeping.

An interior design shows a light-filled foyer area with elements of the white exterior carried through and a floating staircase to a new second level.

A planning permit application for the project has also been lodged with the City’s planning department to enable the project to reach investment-ready stage. Development of the project is subject to securing funding.

Bendigo Art Gallery Director Jessica Bridgfoot said she was excited to present the artist impressions to the community.

“Following the huge success of Elvis: Direct from Graceland, we have again proven the Gallery is a critical cultural hub for Victoria and reinforced its importance to our state’s visitor economy,” Ms Bridgfoot said.

“Leading international galleries are renowned for offering dynamic, vibrant and engaging spaces and timeless placemaking architecture. This expansion will deliver a next generation gallery, which we’re terming ‘The People’s Gallery’.

“The proposed design is on par with iconic international galleries, while offering something thoughtful and truly unique to Bendigo through the Traditional Owner-inspired pattern that will be proudly etched into the face of the building.”

“The Gallery is a trusted Place of Keeping for our artefacts, so we are excited by this opportunity for a Dja Dja Wurrung artist to work with the architects to incorporate a traditional pattern into the building’s design.”

Jackson Clements Burrows and Clare Design jointly submitted a proposal for the expansion, with Clare Design having worked on the Gallery of Modern Art redevelopment in Brisbane.

The proposed design is being tested with Heritage Victoria, as the extension adjoins the existing 19th century galleries. Previous engagement with representatives from local Traditional Owner, education and disability sectors have also informed the design.

Jackson Clements Burrows Director Tim Jackson said the team was looking forward to being part of such a significant project for the Bendigo community.

“We are pleased to present the design, a contemporary addition to Bendigo’s iconic View Street arts precinct that seeks to complement its heritage surroundings while confirming the Gallery’s standing as a world-class building and a place to be inspired, to learn and connect with local history,” Mr Jackson said.

The Victorian Government has previously invested $560,000 from its Enabling Tourism and Investment Fast Track funds to progress designs for the $48M project.

In the lead up to the November State election, Council and the Bendigo Art Gallery Board have each agreed to the early release of $600,000 from their previous financial commitments to help finalise the designs.

“This is Council’s number one priority. In light of current inflation and rising construction costs, the City had the project re-costed and the total project cost has increased. We understand this will make attracting funding more competitive, however we remain committed to advocating for funds at the State and Federal level through upcoming budgets and also State election commitments,” Cr Metcalf said.

Bendigo Art Gallery Board Chair, Jan Boynton said construction would need to start by mid-next year, if the project was to be completed in time for the Victoria 2026 Commonwealth Games.

“We have until June 30, 2023 to secure funding or we will need to pause the project,” Ms Boynton said.

“There has been much discussion about the Gallery acting as a cultural hub for the Commonwealth Games. We believe the Gallery would be a perfect fit to complement the competition and provide spectators and visitors with a unique arts experience.”

Funding outline: The majority of funding support will be sought from the State and Federal governments, together with funding commitments from the City of Greater Bendigo, Bendigo Art Gallery Board and fundraising through philanthropic donations.

To understand more about the project, www.bendigoregion.com.au/bendigo-art-gallery/redevelopment-project 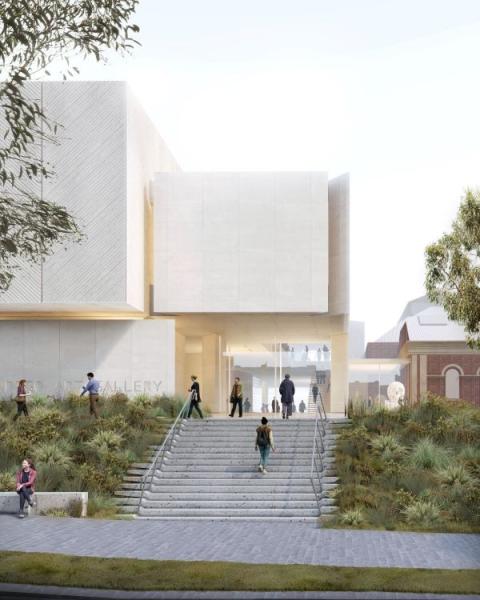 Cancel
Confirm
Back to top